Since last April, publishers have challenged Eyeo, Inc, maker of Adblock Plus six different times in court. They claim that both Eyeo’s “Acceptable Ads” program and adblocking itself are illegal under European law.
After a total of six courtroom decisions, the current score is 0-6 in favor of Eyeo.
Is it time for the publishing industry to give up?
No. But it is time to give up on what’s clearly not working. The primary right of users to control what data enters their machines, and to decide what code is executed there is not likely to be restrained by courts at this point. Nor is Eyeo’s right to selectively filter ads based on pre-defined criteria.
When you’re 0 for 6, it’s probably time to try a different strategy.

Prior legal challenges against Eyeo, Inc / Adblock Plus:

Arguably, a partial victory was scored against Eyeo in May 2016 when Adblock Plus was forced to whitelist Axel Springer’s ads free of charge.
Other than that, Eyeo has successfully defended against all suits. Publishers have displayed a relatively consistent legal strategy, which is to challenge the Adblock Plus’ “Acceptable Ads” program in various ways under copyright law and under the EU’s unfair competition acts. So far, this hasn’t gone well for publishers.
One exception was the case brought by Süddeutsche Zeitung back in March which made far more sweeping claims: Süddeutsche Zeitung argued that an “unwritten contract” exists between publishers and readers. This contract they claimed, grants readers access to free online content only in exchange for viewing ads. The court ruled in favor of Eyeo, ruling that “no such contract exists“.
In an interview with Ars Technica, Eyeo’s head of communications, Ben Williams commented on the industry’s failed track record of legal attacks:

“Every single case wants to do the same thing. They say we shouldn’t offer a service that allows users to block ads.”

And on the official Adblock Plus blog, Williams wrote last week:

It’s another victory for consumers and ad-blocking providers everywhere: we were informed on Friday by the regional court in Hamburg, Germany that blocking online ads is (still) your legal right.

Except, neither of these statements is entirely true.
The courts have not so much consistently defended users’ right to block ads as they have rejected claims that Eyeo’s Acceptable Ads program runs afoul of Germany’s copyright infringement law and laws against anti-competitive behavior. 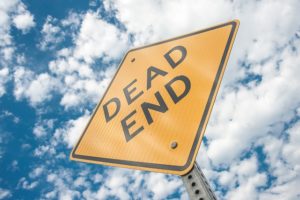 Is this a dead end?

With last week’s Spiegel Online case coming in favor of Eyeo, the legal precedence is certainly stacking up. While the above cases are German national cases, they are all based on European law. And while other European nations must also base their rulings on the same set of European laws, there is always the chance that other European national courts will reach different rulings.
As Paul Henty from UK law firm Charles Russell Speechlys explained to the BBC:

“There could also be different factual or economic circumstances in those jurisdictions which lead to a different result.

“Nonetheless, the Hamburg judgment may be persuasive as an authority and will certainly be a boon to Eyeo in similar AdBlock disputes.”

In other words: Precedence in a different European nation is still precedence. And trying an already failed legal tactic elsewhere while potentially fruitful, is decreasingly likely to work with each successive legal failure.

But maybe we’re just barking up the wrong tree?

Circumvention of Access Controls
(2) No person shall manufacture, import, offer to the public, provide, or otherwise traffic in any technology, product, service, device, component, or part thereof, that—

The Act also prohibits the distribution of tools that enable a user to circumvent access controls or controls that protect a right of the copyright holder.

In other words, it’s not adblocking that’s the issue. It’s evading website access control technology that’s illegal.
Publishers have now tried and failed 6 times to attack Eyeo, Inc. on the basis of adblocking itself,  anti-competitive behavior, abusing a dominant market position and basic copyright infringement.
These (failed) positions read like pages from yesterday’s adblocking playbook. Today, the technological arms race is increasingly sophisticated. Intelligent access control technologies go head-to-head with increasingly sophisticated circumvention technologies.  Newspaper publishers and other websites regularly defend access to their copyrighted content by setting their own terms and conditions. When users don’t abide by those terms (ie: Not using an ad blocker) they are often barred entry. As this contest between adblockers and website access-control technologies ramps up, it’s increasingly clear that laws are being broken.
If the definition of insanity is applying the same failed strategy again and again, perhaps it’s time for the publishing industry and their lawyers to stop being “insane” and demand the application of laws which clearly apply.

18 Replies to “What will it take to defeat adblocking in court?”