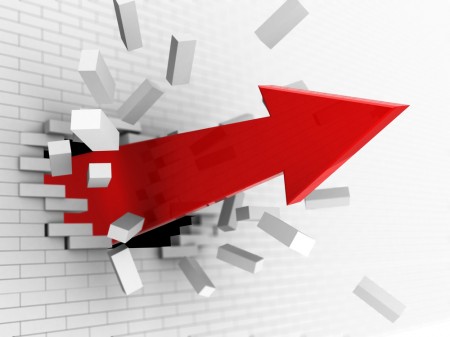 Why cease purchasing this inventory? Because GroupM sees ads that bypass ad-blockers as potentially damaging to the brands they represent.
GroupM managing partner Joe Barone writes:

GroupM agencies are beginning to counsel clients that we should actively prohibit reinserted ad inventory from inclusion in their buys. We simply don’t know whether consumers will blame the site publisher, the advertiser, or the blocker, and we should not put advertiser brands at risk. Ignoring consumers’ ‘Do Not Advertise’ requests is a risk we are not willing to tolerate for our brands.

GroupM’s “brand-first” position is seemingly positive at first glance, but ultimately places an impossible burden on the backs of publishers who have little control over the ad-quality requirements GroupM places on them.
Publishers aren’t “ignoring” consumers’ requests, as Barone puts it. On the contrary: Publishers are hearing consumers’ requests. They’re considering them, and plainly responding “No” — as is their right.

Let’s fix the user experience first, and then we can engage with consumers and tell them that we’ve fixed the UX, we made the experience as light as possible, and ask them to consider whitelisting [the site] or switching off the ad blocker.

It looks like Montgomery is joining the chorus of “thought leaders” calling for publishers to adopt a ‘begging’ model. ie: Pleading for “whitelisting” from consumers of free content.
Let’s deconstruct this position:
First off, the word “fix” is hopelessly subjective. One man’s “fixed” UX is not necessarily another’s. While it is clear that some users will respond positively to improvements in ad quality, the question is “how many?“.
As more than one survey has shown, a frightening percentage of users feel that an appropriately “fixed” user experience consists of nothing less than no advertising and no fees whatsoever.  The belief that there is some universal common ground which can be reached between publishers and readers, where all users accept standards of ad-quality in exchange for whitelisting, is based on tenuous evidence. Yes, some surveys suggest as much. Other surveys suggest otherwise. 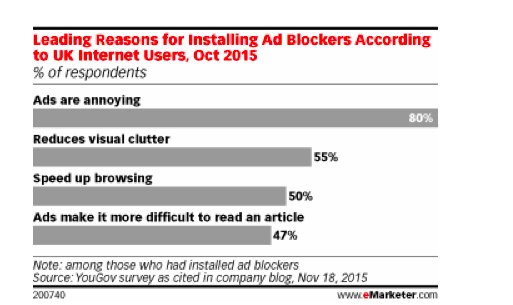 Even if some users consent to whitelisting, recovering some small percentage of overall impressions isn’t going to cut it from a revenue perspective. Especially when one considers that the performance of these recovered impressions will likely be technologically hampered by stricter standards.
The last half of Montgomery’s dictum is ultimately another call for the supremacy of user choice over financial viability of publishers. What if after “fixing” the UX, and asking users to “consider whitelisting”, the response from a large slice of readers is still, “No, thanks“?
The elephant in the room here is that in any scenario where users wield 100% of the power to view or not view advertising, the option of “no advertising” will always win for a large percentage of users. It may not ultimately matter that some percentage of users consents to whitelisting if the remaining percentage of refusées still represents a killing blow to sustainability. 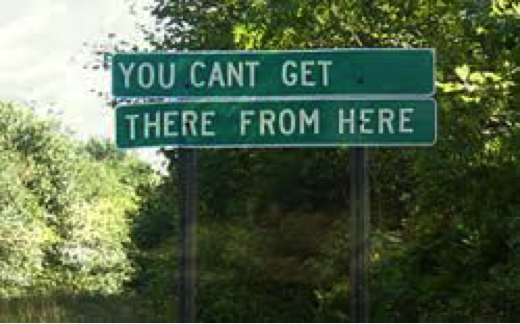 You  (might not be able to) get there from here

What is undeniable is that millions of users are already perfectly happy with their current free/ad-free web courtesy of adblocking and have little incentive to change. The belief that “having a conversation” will somehow lead a meaningful majority of consumers away from their optimal user experience of an ad-free solution to a sub-optimal experience of an advertised solution flies in the face of consumer logic.
As such, a sustainable “middle ground” of ad-quality in exchange for voluntary whitelisting may not be possible with the current power imbalance between publishers and adblock users.
Which isn’t to say that a middle ground cannot one day be reached. But it won’t be reached as long as ‘free and ad-free’ remains an easy, accessible option via adblocking.
What adblock detection, and it’s more sophisticated cousin ad-reinsertion, do is reset the playing field in favor of publishers while the issues of ad-tech, browser security, privacy legislation and tracking can be addressed.  Neither readers nor publishers like this near term solution — but offering readers a 100% free option with no ads at all is a terrible near term fix which has devastating consequences.
As previously discussed, imposing near-term revenue denial on publishers places little upstream pressure on the ad-tech supply chain and catastrophically affects the content ecosystem with few results to show for it.

Few would deny that ad-tech needs a ground-up overhaul. But GroupM’s insistence that publishers should bear the pain of ad blocking without the available recourse of ad-reinsertion is somewhat ironic — considering that some of the blame for adblocking rests with GroupM’s companies themselves.
If we are to believe that much of the reason for ad blocking in the first place rests on issues of user experience, then shouldn’t GroupM’s subsidiaries be looking in the mirror instead of recommending against inventory which circumvents Adblock?

8 Replies to “What GroupM gets wrong about ad reinsertion”