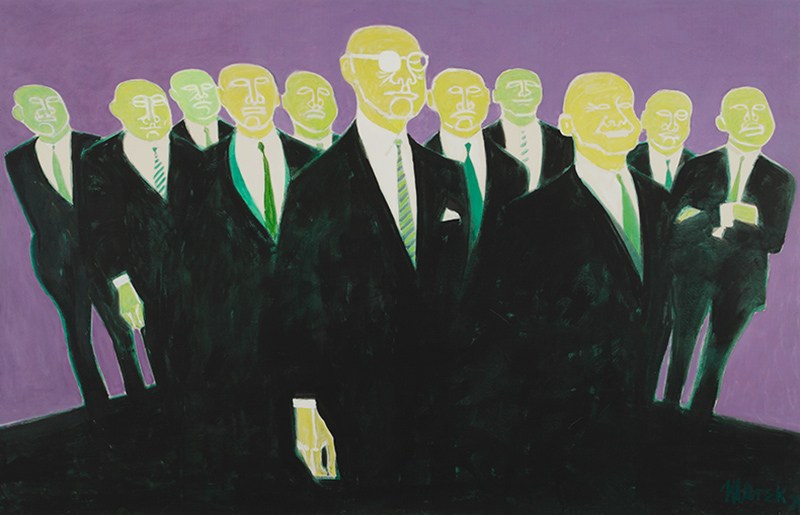 Last week, Adblock Plus announced the first members of it’s “Acceptable Ads committee”.
If all goes as planned, this newly appointed advertising politburo will decide for us which ads are deemed “acceptable”. Or more precisely, which ads should be filtered and which ads will not be filtered.
These privately appointed commissars of the web will be structured into 11 subgroups, comprised of industry leaders from the advertising, publishing, ad-tech and consumer advocacy worlds.
Digiday sums up the committee as follows:

The committee is split into 11 subgroups, each devoted to a segment of media such as publishing, ad tech and advertisers. Each section is headed by a committee seat. Condé Nast, Rocket Fuel and Dell are some of the larger companies on the list and each one heads a subgroup. There will also be a subgroup to represent users, but the individual to seat that group has not been named yet.

That’s all well and good, but when a small, German internet company (one which the iAB called an “extortion racket“) takes it upon themselves to cobble together a bureaucracy of well-heeled industry executives to quibble about the definition of “acceptable” while ignoring fundamental realities of how ad blocking works, it’s hard not to be critical. It doesn’t matter that Eyeo, Inc (creator of Adblock Plus) has removed themselves from the equation. As I’ve noted many times before: This isn’t going to work.
The industry still has no teeth when it comes to adblocking. And a room full of toothless executives still has no teeth.

The problem is simple: Governance requires power.
And there isn’t any here. Whatever this committee decides, users ultimately have options which can and will override those decisions.
Adblock Plus didn’t become popular because of their gifts at mediation, or some ability to identify a tender middle ground between advertisers and readers.
Adblock Plus is popular because it blocks ads. Period.
Transitioning from a product that delivers a blissful, cost-free / ad-free browsing experience to one that allows “some” ads through is easier said than done.
It’s not as if Adblock Plus is the only game in town. Being the ad blocker that allows “some” ads through isn’t likely to be a competitive option versus those that allow none.
Not only is Adblock Plus’ relative market-share falling, but it’s far from the most effective ad-blocker available today. Ad blockers like uBlock Origin already have more sophisticated adblocking technologies and don’t adhere to the Acceptable Ads “standard”. It’s hard to see how Adblock Plus’ by-default lower-quality browsing experience (vs. ad-free) isn’t going to result in continued migration away from their platform — even if Acceptable Ads can be deactivated.

On a strictly numbers basis, the Acceptable Ads program is still primarily an ‘Adblock Plus -thing’ .
For the Acceptable Ads committee to be organizing a duma composed of members they have materially damaged, and attempting to enact standards that already promise to be unpopular across a broad spectrum of readers, publishers and advertisers — their position would need to be unassailable.
And it isn’t.
Adblock Plus is facing stiff competition from rising, next-generation adblockers that block ads better, and the buy-in among competing adblockers is not nearly large enough for Acceptable Ads to make a difference to publishers.

What really makes the entire concept of this new committee absurd is that Acceptable Ads is optional even for Adblock Plus users. In other words, if you don’t like it you can turn it off and go back to ad-free bliss.
This isn’t some tiny detail. It’s crucial to both the efficacy and legitimacy of the entire program. Ad viewability will still be at the mercy of users.


Will some users opt to see Acceptable Ads given the choice?
Of course. But the number of users opting to view Acceptable Ads will by definition be a fraction of total users. And advertising revenues will therefore also be fractional.
Basing the future viability of the free Web on an appeal to user “understanding” and the lackluster promise of reduced/fractional earnings is a poor bet to say the least. It must also be noted: That plan hasn’t worked so far.

What few people seem to discuss is that Acceptable Ads are by definition worse performing ads. The uncomfortable truth is that ads that are placed more centrally (and are thereby more distracting), perform better and have higher viewability.
Should users have a right to not be distracted? Yes. But at a mandatory cost. And as long as both ads and costs can be avoided by simply using a different adblocker, or opting out of the Acceptable Ads program, the entire premise will logically fail.
As Digiday notes:

ABP currently blocks ads placed in the middle of an article. But because ads at the top and bottom of articles often have poor viewability, this can be a cumbersome restriction for publishers, said Paul Lomax, chief technology officer of ABP committee member Dennis Publishing.

Ad reinsertion is the answer

Until publishers start using ad reinsertion and adblock circumvention strategies, attempts to recover revenue from adblockers are doomed to fail. Users should be given a choice, but that choice cannot include a browsing experience that is both ad-free and cost-free. As long as alternative ad blockers exist which can block Acceptable Ads, and as long as the Acceptable Ads program itself is optional, the choice for too many users will be clear: No ads at all.
It won’t matter if the Acceptable Ads program gains some small amount of traction among a subset of readers. Publishers cannot afford limited viewability by a subset of their readership. Nor can they afford the reduced performance of static, poorly placed advertising.
Asking users to come to a middle ground which is more expensive, slower and more cluttered is just more wishful thinking.
Last year the iAB called Adblock Plus a “mendacious coven of techie wannabes“. Apparently having failed to stay at the top of the technology ladder, this year they’re behaving more like wannabe government bureaucrats.
One thing I’ll give Eyeo credit for is immediately heading for the door after forming the committee. They know as well as anyone that when this this group of diametrically opposed constituents attempts to agree on anything it won’t work.
And given the falling market share (and efficacy) of Adblock Plus, it won’t matter either.

52 Replies to “The new Acceptable Ads committee. (And why it still won't work)”