One of Germany’s largest publishers, Axel Springer just joined the ranks of those who block adblock.
As of right now, visitors to Bild, one of Europe’s best-selling tabloids will now be required to shut down their adblocker in order to access the website. Alternatively, visitors have the option of becoming paid subscribers at a rate of €2.99 ($3.40) per month.  Interestingly, subscribers will then enjoy an “ad reduced” experience — with  advertisers still given limited ability to reach subscribers. 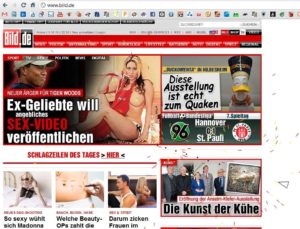 In a public release, the publisher wrote:   “Whoever does not switch off the adblocker or does not pay cannot see any content on Bild.de, as of now”.
Axel Springer has been struggling under a massive surge in ad blocking popularity.  As we noted earlier, a stunning percentage of  Germans block ads.
What is notable about this move is that this is not only a major publisher, but this is a “full block” as opposed to a “nag”.  Many websites use technology like BlockAdblock to create “nag” screens in the hopes of gently convincing customers to remove their ad blockers.  In the case of Axel Springer,  there is no such soft-glove treatment.  Users are told to either disengage their adblockers or leave.
It’s a big move. And it’s one we’ve seen coming for a while. Now that a major publisher has taken this move, one has to wonder who’s next.